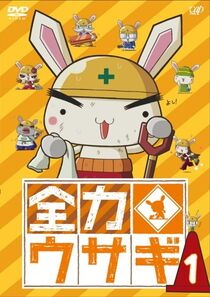 Zenryoku Usagi is an anime series created by Ikeda Kei that aired throughout 2008 as part of anthology series Chibi Ani Gekijō. The series takes place in a world populated by rabbits, and follows the adventures of the Zenryoku Usagi, a group of construction workers.

Minari is the only one who makes it out of the eating contest with a bloated belly, due to his appetite.

After speed-eating four bowls of ramen, Ojou sees that she has gained weight and starts dieting.

Minarai, Ojou, and Neesan go out for meat on payday.

Minarai eats all of Neesan's stew, partly because the others couldn't stand her bad cooking.

While fishing for lunch for all of the workers, the main characters eat the first few fish they catch.