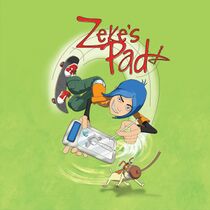 Zeke's Pad is a Canadian-Australian computer-animated series created by Liz Scully that originally ran on YTV in Canada from January to July 2010. The series centers around a teenager, Zeke, who owns a digital drawing pad that creates whatever he draws.

Tired of oatmeal, Zeke uses his pad to conjure a mountain of pancakes, gorging himself and causing him to fail a physical exam. As a result, he is sent to a fitness camp.

Zeke accidentally regresses himself to a little kid and eats too many cookies.