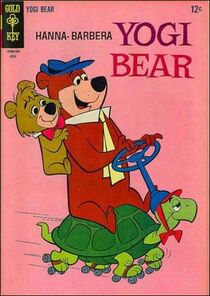 Yogi Bear has been adapted into comics from numerous publishers, including Dell, Gold Key, Marvel, Harvey, Archie and DC from 1961 to 1999.

Cindy Bear falls for Clyde Bear when Yogi fails to impress her at a game of Ring the Bell, and gains weight in the process. Clyde dumps her when she drowns during a boat ride, calling her a "fat blimp" despite it being his fault.

Yogi and Boo-Boo ignore Ranger Smith when he puts them on a diet free from picnic food.