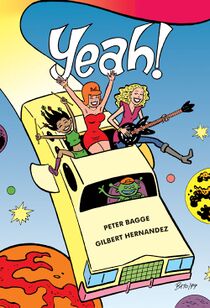 Yeah! is a limited comic book series created by Peter Bagge and Gilbert Hernandez and published under DC's Homage Comics imprint from October 1999 to June 2000.

The title of the comic belongs to its three main characters, a girl band famous all across the universe except for Earth.

When they eat some strange space food, Krazy, Honey and Woo-Woo are affected in different ways - one becomes even thinner, one becomes even shorter and one becomes even chubbier. Honey's pet goat Buckeye is also affected, has he has grown to a larger size and even fatter than Woo-Woo.