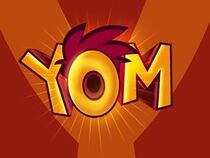 YOM is an Indian animated cartoon series created by Munjal Shroff that began airing sometime in 2016. The show’s premise follows a young boy named Yom who has the power to change into various animals to help people and solve problems.

Cheentimal’s scheme in the episode involves inflating people with an experimental gas and then harmlessly deflating them with a dart gun.