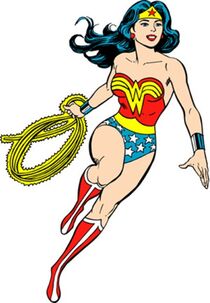 Wonder Woman is a superheroine in the DC Comics universe, created by William Moulton Marston in 1941, who is recognized as a feminist icon for her fights for peace, love, justice and equality.

With Aquaman, Superman and Batman busy, Green Arrow, The Flash, Wonder Woman and Green Lantern are imprisoned through "energy-sapping spirals" by inhabitants of the planet Angellax, who have placed a Cosmic Fun-House onto Earth. Eventually Green Arrow manages to free them, but their only escape is through the fun-house, where they change shape, most notably Wonder Woman, who has grown fat, though less realistically so in the following two pages.

Similar to the last story, Wonder Woman becomes as fat as a circus lady after using the Mirage Mirrors she borrowed from Queen Hippolyte at the Charity Carnival, to play a trick on Steve Trevor, a man who cannot tell the difference between her and her secret identity Diana Prince. This shape especially comes in handy when she rolls into a ball to knock down a steam train used by Angle Man and his henchmen in a robbery scheme.

Pinon is a scorpion-like woman created by the story's villain, who uses her to drain Diana's blood so he can study her powers. She succeeds, becoming bloated in the process.