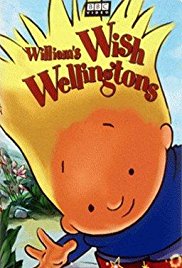 William’s Wish Wellingtons is a British children’s animated TV series created by Carole Lapworth which began airing on BBC in October 1994 and ran until December 1996. The show focuses on a young boy named William who owns a very special pair of red boots called Wish Wellingtons that can magically grant his wishes.

Sick of eating his vegetables at dinner, William uses the Wish Wellingtons to wish for lots of candy and sweets, which transforms everything around him into candy. Eventually, William eats so much that he out-grows his house and rolls down the street until an old woman pops him like a balloon.