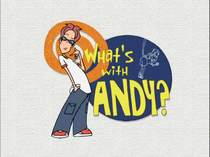 What's With Andy? is a Canadian-French cartoon series based on the Just book series by Andy Griffiths, airing on Teletoon from September 2001 to March 2007. It is about the life and trials of Andy Larkin, a teenager who calls himself the "world's greatest prankster".

Andy searches the shopping mall for a restroom after bloating up at a drinking contest.