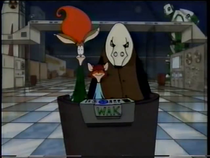 Weird Answer Kommand is a series of short cartoons that aired on Nickelodeon throughout the 1990's. The series answers unusual questions given to an organization of anthropomorphic animals; a panda named Jack, a fox named Hailey and a kangaroo named Bonnie.

In one short, Bonnie tests the limit of how many potato chips one can eat, growing fat in the process.