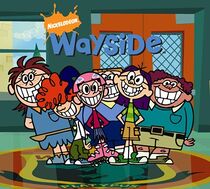 Wayside, often known as Wayside School, is a Canadian cartoon series created by John Derevlany that lasted from June 2007 to September 2008. Based on the book series Sideways Stories from Wayside School by Louis Sacher, the series follows the exploits of new student Todd, as he adapts to his new life in the top floor of an unusually designed school.

Myron finds an instrument called the Strumplefloozle that can control others and make them do various things. This includes making Dana fat for a second.

Maurecia bloats up while drinking water from the fountain until there is none left.