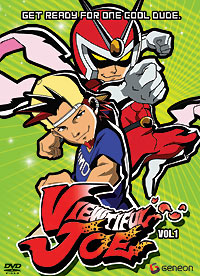 Viewtiful Joe is an Anime Series Based on the Game of the Same Name Developed by Capcom. The Story is Focused on Joe, a Guy Who's a Fan of Captain Blue That Becomes a Super Hero by Get in Movie Land, he Must Protect Movie Land for the Attack of Many Monsters Along with his Friend and Partner Captain Blue Junior or Simply Junior.

Episode 3- Dude, Did You Say Viewtiful?[edit]

After Gran Bruce hits a tree with his head, a coconut falls down and hits his air tank that goes in his mouth. The air started to leak and Gran Bruce expanded into a ball shaped body as he couldn't handle the pressure, getting launched into the air to the sea.

Episode 17- Captain Blue vs. The Squid of Inescapable Doom[edit]

Joe eats 100 cheeseburgers and gets a stomach ache so bad they call an ambulance. The Doctors prick him in the backside to allow the build up of gas to escape, deflating his stomach.