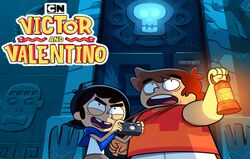 Victor and Valentino is an American animated TV series created by Diego Molano and produced by Cartoon Network, which began airing in March 2019. The series focuses on the titular half-brothers, Victor and Valentino, who encounter many mythical creatures and phenomenon during their day-to-day life of living with their grandmother in the fictional Mexican town of Monte Macabre.

The trickster spirit HueHue swallows Victor’s luchador wrestling outfit after animating it and dancing with it.