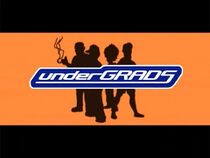 Undergrads is a short-lived television series from 2001, made by Pete Williams. It only lasted thirteen episodes, and there are no signs of a second season. The show follows four friends in their first year of college and other recurring characters. Classes are never shown, and episodes focus on other aspects of life on campus.

Nitz realizes that he has gained the "freshman fifteen" and tries to lose weight before doing the Xposed Xpo. He's successful, but realizes he hasn't lost any of the weight in his backside.