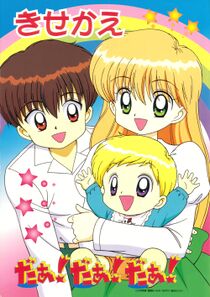 UFO Baby is a manga written by Mika Kawamura that originally ran from 1998 to 2002, with an anime series beginning in 2000 and ending before the manga's completion. It follows 8th-grader Miyu Kouzuki and Kanata Saionji, son of the Kouzukis' friend, as they take care of an alien baby named Ruu.

Mikan deflates upon learning that Miyu and Ayumi lost her anatomic diagram. Kanata uses a pump to get her back up.

An alien spirit takes over Miyu's body and feasts on Mitarashi; Miyu's soul worries that it will make her fat. Miyu appears slightly bloated when the spirit leaves.