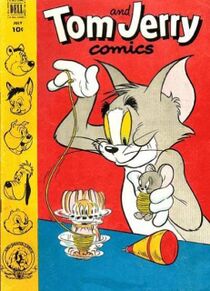 Tom and Jerry is a comic series featuring the titular cat and mouse from the series of cartoons of the same name. Hundreds of issues each featuring several stories of the duo as well as several other characters (most of which originated from the comics' previous incarnation known as: Our Gang) in varying formats were published by Dell in 1942 and continued throughout the 20th century.

Jerry and Tuffy trick Tom into eating lead pellets from shotgun shells, which he thinks is the caviar they stole from him.

Jerry and Tuffy eat several boxes of cereal to rack up boxtops for mail-order prizes.

A lion forces Tom to cook a large meal for him.

Jerry and Tuffy drop an alarm clock into Tom's mouth, which he then swallows.

Wuff and Sammy eat a large pie secretly prepared by Charlie, who then manages to catch them since they're too full to run away.

Thinking that Tom would be nicer to them if he was fat, Jerry and Tuffy feed him plenty of food and increase his hunger with appetite pills to make him gain weight. Their plan works, however the much jollier Tom is even more annoying, so they decide to slim him back down again.

On the cover, Jerry is shown to have eaten all the filling in a slice of pie.

Tom is out of shape from not chasing Jerry and Tuffy. They try to help him get back into shape but wind up getting fat as well once they've given up.