The Twisted Tales of Felix the Cat 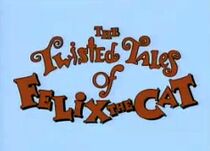 During his stay at the fabled Milky Way, unrelated to the MGM cartoon of the same name, Felix starts to gain weight from the constand comsumption of dairy. When he says he's had his fill, however, Felix is suddenly taken to a lab and force fed more and more dairy. He manages to escape when he grows so much the restraints burst open. Fortunately it was all a dream.

Felix eats a sample of a food and he gains weight instantly to see if it can make him break free from the ropes.

A shark drinks a shaked soda and inflates from the gas

Felix has to let himself free after being trapped, so he has to drink milk to break the ropes