The Tower of Druaga 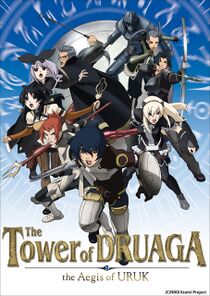 The Tower of Druaga is an anime series based on the 1984 arcade game of the same name. It has two seasons: The Aegis of Uruk and The Sword of Uruk. The first season follows Jil, his older brother Neeba, and their groups as they try to climb the titular tower, which is extremely tall and filled with monsters. During the Summer of Anu, the monsters weaken, giving people the chance to reach the summit and claim the mystical Blue Crystal Rod. The second season takes place half a year later. The tower has been conquered and peace abounds. However, Jil and his friends rescue a young girl who may be connected to a secret in the tower, so they prepare to climb it once more.

Oro summons an ice spirit to fend off Uragon's men. The ice spirit balloons up before unleashing a snow storm.