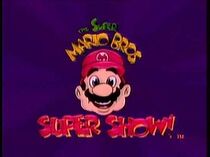 The Super Mario Bros. Super Show! is a cartoon series based on the Super Mario Bros. franchise produced by Nintendo and DiC Entertainment. It ran in syndication from September 4, 1989 until December 1, 1989 for one season and a total of 65 episodes.

The series focuses on the Mario Bros., Princess Toadstool and Toad battling King Koopa all while the plumbers look for a way to return to Brooklyn.

Mario and Luigi receive their black belts after defeating Karate Koopa. Unfortunately for Mario, his belt doesn't fit him after gorging his celebratory pizza.

King Koopa ambushes the princess but she thwarts his kidnapping attempt by inflating him with his scuba tank.