The Spooktacular New Adventures of Casper 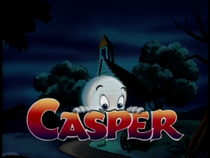 The Spooktacular New Adventures of Casper is an animated series that serves as a spin-off to Casper, a live-action adaptation of the Harvey Comics character, Casper the Friendly Ghost. It was created by Sherri Stoner and Deanna Oliver, and originally aired from February 1996 to October 1998.

Staying truer to the style of the feature film rather than the original comics and cartoon shorts, it depicts Casper as having to deal with his three uncles, his cousin and his "ghoulfriend".