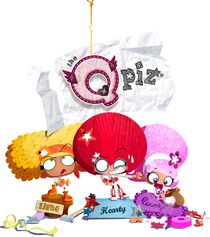 The Qpiz is an Italian-Spanish-Korean cartoon and was also featured in magazines for girls. Hearty, Liebe, and Lovelyn are three girls from another planet who came to Earth to defend love and romance. Their exploits never go as planned, leading to comical outcomes.

The Qpiz use voodoo dolls to get revenge on the Cherries for taking their friends' dates, starting with Liebe making Kerry eat a bunch of hot dogs.