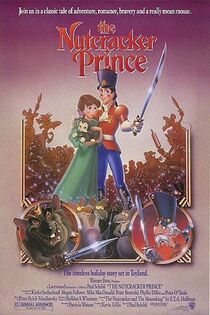 The Nutcracker Prince is a 1990 Canadian film based on E. T. A. Hoffmann's story The Nutcracker Prince and the Mouse King. It also takes influence from the ballet adaptation by Pyotr Ilyich Tchaikovsky. During Christmastime, Clara is told the story of Hans, a young man who was turned into a nutcracker by mice. She ends up in a battle between the mice and her toys, led by the same nutcracker. Hans can break the spell if he defeats the evil Mouse King and wins a maiden's heart. Clara wishes to help, but she has to choose between her dreams and real life.

In Drosselmeier's story, the mice eat the cake made of blue cheese.