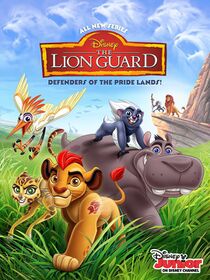 The Lion Guard is a TV series on Disney Junior that is based on the movie The Lion King. It began with a pilot movie in January 2016. Taking place after the original film and somewhere within the sequel, it centers around Simba's son Kion, who is made leader of the new Lion Guard. With the diverse team of animals put together, Kion and his friends protect the Pride Lands and defend the Circle of Life.

During the song "Outta The Way", Janja, Cheezi, and Chungu imagine feasting on the animals of the Pride Lands.