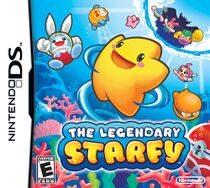 The Legendary Starfy is a video game developed by Nintendo and TOSE for the Nintendo DS. It is actually the fifth game in its series, as the other games were not released outside of Japan. This game has Starfy, the prince of Pufftop Palace, go into the sea once again to help Bunston the space rabbit when pirates are after him.

During the fight with Mashtooth, the final boss, he will use his nose to try to inhale Starfy. If Starfy gets caught, the player must try to struggle, but if not done fast enough, Starfy gets swallowed, with his impression being seen on Mashtooth's belly. This results in a game over.