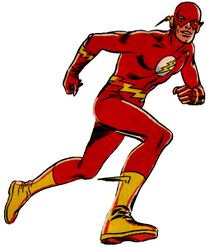 The Flash is a superhero from the DC Comics universe created by Gardner Fox and Harry Lampert in 1940. A member of the Justice League, he is known for his "super-speed", running exceedingly fast and violating the laws of physics.

Hours after being shot with an energy ray by Dr. Sarah Corwin, Flash sees himself undergoing a series of bizarre transformations, from growing fat (as in issue #115) to transforming into a gorilla like Grodd (who is also the villain in that issue) before the hallucinations stop.