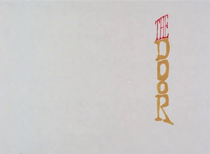 The Door is an independent animated short film directed by Ken Mundie and co-produced by Bill Cosby for Warner Bros. in 1967, with the intention of being an anti-war story. For years since it was without a video release, until it was finally released as part of the Looney Tunes Platinum Collection.

The two Native Americans who serve as the main characters of the story shake a tree and grow fat after eating all of its fruit.