The Curse of Monkey Island 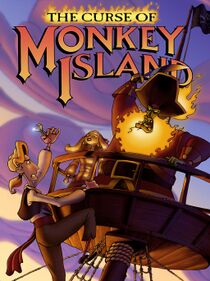 The Curse of Monkey Island is the third game in LucasArts' Monkey Island series. In this game, Guybrush Threepwood, Mighty Pirate™, must rescue his fiancée, Elaine Marley, after he accidentally proposes to her with a cursed voodoo ring, turning her into a solid gold statue. During his journey, Guybrush encounters his arch-nemesis, the Demon Pirate, LeChuck.

Near the beginning of the game, on Plunder Island, Guybrush is eaten by a giant snake. To escape, Guybrush must mix an ipecac flower (found just before the encounter with the snake) with a jar of maple syrup (found inside of the snake's belly) to create syrup of ipecac. After using the syrup of ipecac with the snake, it will cough up Guybrush making him land in quicksand.