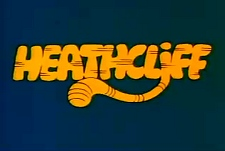 Heathcliff is an American-Canadian-French cartoon series created in 1984. Based off of the Heathcliff newspaper comics, the series follows the titular tabby cat Heathcliff on his many mischievous adventures. Every episode of Heathcliff contains a segment starring the Catillac Cats, a group of junkyard cats (along with the guard dog Leroy) led by Riff-Raff, who usually schemes to get rich.

After a few attempts to sneak into a bird sanctuary, Riff-Raff uses a wooden reed to sneak under a duck pond. After being caught, the mother duck blows into the reed, inflating Riff-Raff, who then deflates like a balloon after being tickled.

In the Pet Tips portion of the show, Heathcliff explains how it important it is to know just how big a puppy will get over time, illustrated with a dog rapidly growing as big as a house.

Tired of not being able to find good food, the Catillac Cats seek out Professor Blix for help. Blix invents an instrument that can attract all the fish they can eat, which Hector steals for himself.

In an attempt to impress Cleo, Riff-Raff builds a cat condo in the junkyard. After discovering the condo, Leroy attempts to destroy it, but ends up flattened by part of the condo. Riff-Raff over-inflates Leroy, causing him to rocket off.