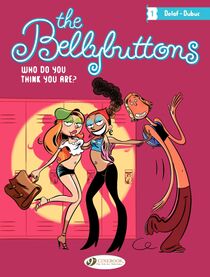 The Bellybuttons (Les Nombrils) is an ongoing French Canadian comic series created by Marc Delafontaine and Maryse Dubuc (Delaf and Dubuc) and serialized in Safarir and Spirou magazines since 2004, with album versions published since 2006. It earned itself a place in 1001 Comics You Must Read Before You Die in 2011.

Targeted at young adult women, the comic focuses on three girls, the overly glamorous Jenny and Vicky and the more simplistic Karine, as they try to woo any handsome man they see while testing their friendships along the way. They would often be friends or rival over each other - Karine suffering the worst out of this relationship.

Jenny visits Hugo's family and gets a potbelly after dinner, but when her boyfriend stops by the door she cannot help but use the worst possible excuse to explain it.