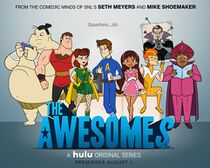 The Awesomes is an American animated Hulu series created by SNL's Seth Meyers and Mike Shoemaker. The show tells the story of a team of superheroes who struggle to be appreciated by society after they replace the previous superhero team.

While chasing after Malocchio Jr. in an alien dimension, Frantic pricks himself on a tree, resulting in his whole body bloating up from the impact.

Frantic spends half of the episode snacking on various candies, only to end up bloated and then throw up.