The Adventures of Fuzzy & Floppy 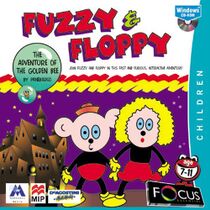 The Adventures of Fuzzy & Floppy is an Italian point-and-click adventure game trilogy created by cartoonist Daniele Panebarco, consisting of Il mistero dell'ape d'oro, Il furto della rotonda and Il raggio magico. Only the first game, released in 1995, has been published in more than one country, under the title Fuzzy & Floppy: The Adventure of the Golden Bee.

These games follow the adventures of Fuzzy and her husband Floppy, two detectives bearing resemblance to Minnie and Mickey Mouse. In their first adventure, they attempt to retrieve the Golden Bee after it is stolen by Professor Hacker and his goons.

The Adventure of the Golden Bee[edit]

A car crash sends Floppy flying into the river, where he drowns and ends up looking like "a balloon" when fished out. Clicking his belly will help save him.