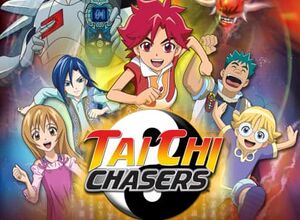 Tai Chi Chasers is a South Korean/Japanese anime TV series produced by JM Animation and Toei Animation that began airing on KBS in April 2007 and concluded the following year in January 2008. Several years later, an English dub was produced by 4Kids starting in September 2011 but was then canceled in May 2012, leaving only the first two seasons of the show dubbed. The show’s premise follows Rai, a young boy with special Tai Chi skills who is the descendant of a mystical race from a parallel universe known as the Tigeroids. Battling in a lasting war with the sinister Dragonoids, the Tigeroids struggle to claim the legendary Tai Chi characters that will grant them great power.

One of the ways Rai takes advantage of the gang’s amnesia is by having them feed him lunch.