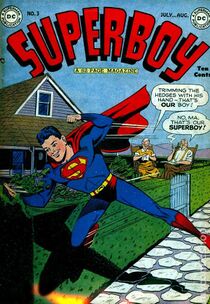 Superboy is the name of several characters in the DC Comics universe, with earlier versions simply being a depiction of Superman in his teenage years, and later versions a separate entity or clone co-existing alongside him. He was created by Jerry Siegel and introduced in 1944 due to the success of Robin, the Boy Wonder.

While filling in for Prince Rama during his time in the kingdom of Bosmir, Superboy frees himself from the clutches of the Panther Maiden, who is fully convinced that Prince Rama has enough superpowers to be her permanent slave, by backfiring a drugging scheme on her. As a result, she is given a ferocious appetite and temporary weight gain, before slimming down immediately later on.

The original incarnation of Mammoth Mutt, a dog with the ability to inflate himself, makes his only appearance in which a missile is fired straight through his body, killing him.

Mammoth Mutt's former girlfriend, Mammoth Miss, is present, but for this story only.