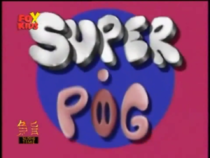 Super Pig (Tonde Būrin) is an anime series created by Taeko Ikada originally broadcast from September 1994 to late August 1995, based on a manga that ran for just a little longer. Saban Entertainment produced an English dub which only saw a two-day run on Fox Kids in the United Kingdom in 2001.

A parody of the usual "magical girl" anime, a teenager named Kassie Carlen finds a hungry yellow pig who transforms her into a superpowered pig, which is not the kind of superheroine she wanted to be, and has to avoid letting people know or else she will be stuck in her pig form for the rest of her life.

Kassie and Buutan, a person who dresses up like Super Pig, become hungry during their boxing practice, so Heather calls a limo to bring a long table of food.