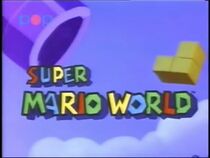 Super Mario World is a cartoon series produced by Nintendo and DiC Entertainment. It ran on NBC Saturday mornings from September 14, 1991 until December 7, 1991 for one season and a total of 13 episodes.

Based on the SNES video game of the same name, the series focuses on the Mario Bros., Princess Toadstool and Yoshi as they embark on adventures with cave people and fight off King Koopa in Dinosaur Land.

Mario, Luigi and Yoshi stuff themselves with Koopa's fast food, becoming bloated but still going back for more. The princess eventually forces them to diet.

Mario becomes inflated when he pops a P-Balloon.

Later, Yoshi eats the entire sack of cave crops he helped Mario and Luigi take back from Cheatsy.

Luigi grabs a P-Balloon which inflates him temporarily.