Super Mario is a series of platformer video games developed by Nintendo, and created by Shigeru Miyamoto. Taking place in the Mushroom Kingdom and starring Nintendo's mascot Mario, the games tell the story of Mario rescuing Princess Peach from Bowser, along with the help of his many friends.

This game introduces the Power Balloon (a.k.a the P-Balloon), which can cause Mario or Luigi to inflate and float around in any direction for a limited amount of time. The P-Balloon can be found in World 2's Donut Secret 1 and Donut Secret 2, World 5's Forest of Illusion 1, and the Special World's Tubular. 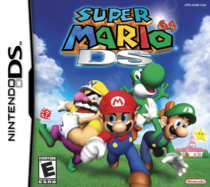 The Power Flower is a new item that replaces the Metal Cap and Vanishing Cap, as well as give new powers to Mario and Yoshi. When Mario uses the Power Flower, he inflates with air, allowing him to float to new locations. 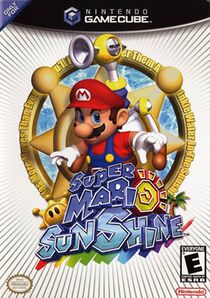 Super Mario Sunshine is a 3D action-adventure platformer game released in 2002 for the Nintendo GameCube. It is the second 3D Mario platformer after Super Mario 64. Mario, Princess Peach, Toadsworth, and some Toads go to Isle Delfino for a vacation. After arriving, they learn that graffiti is polluting the island, which drives away the Shine Sprites, thanks to a Mario impostor. The real Mario is accused and sentenced to clean up the mess. With help from a device named F.L.U.D.D., Mario cleans the goop, gathers the Shine Sprites, and seeks to clear his name.

One of the enemies, a Piranha Plant can be inflated using F.L.U.D.D.

The boss of Bianco Hills (Episode 2) is Petey Piranha. When fighting Petey Piranha, Mario has to shoot water into his open mouth. Petey becomes bloated and falls over, giving Mario a chance to ground pound his exposed navel. If the player does not ground pound the belly quick enough, Petey will expel the water, forcing the player to repeat the process. Humorously, the player can inflate Petey without making him fall over, by stopping before he gets too full, letting the battle continue. This does not affect the battle in any way.

New Super Mario Bros. was released for the Nintendo DS in 2006. It was the first main 2D Mario game since Super Mario World.

Super Mario Galaxy is a platformer game released in November 2007 for the Nintendo Wii. It is considered to be one of the best video games of all time and has a sequel titled Super Mario Galaxy 2. During the Star Festival, Bowser's forces attack and capture Princess Peach and her castle, with plans of universal domination. Mario fails to rescue her and is sent falling to another planet where he meets Rosalina and the Lumas. Bowser has actually stolen the Power Stars from their home, the Comet Observatory, for his own use. Now gifted with the power to travel through space, Mario sets out to retrieve the Power Stars so that the Comet Observatory can reach the center of the universe where Bowser lies.

In the game are Hungry Lumas, a type of Luma that will ask to be fed a certain number of Star Bits. Doing this makes them transform into planets and galaxies.

A Luma named Lumalee usually appears before boss battles. In exchange for 30 Star Bits, she will turn into either a Life Mushroom or a 1-Up Mushroom for Mario.

There is also the Lumacomète, who will move around Prankster Comets for 20 Star Bits.

Super Mario Galaxy 2 is a platformer game released in 2010 for the Nintendo Wii. It is the sequel to Super Mario Galaxy. It retains many gameplay elements from its predecessor, but also introduces new ones. As Mario heads to Princess Peach's castle to have cake and watch shooting stars with her, and also meeting a Baby Luma, he sees that Bowser is attacking and has grown gigantic. Bowser captures the princess and plots to take over the universe again. Mario gives chase and ends up on a planet-like spaceship piloted by a Luma named Lubba. It turns out that Bowser had taken the Power Stars he and his crew were using. Lubba gives Mario command of the ship, and they travel through space to find more Power Stars until they can reach the center of the universe and stop Bowser.

If Yoshi eats a Blimp Fruit, he becomes Blimp Yoshi. This makes him inflate and float up to higher places. Yoshi returns to normal if the "Air" meter empties, or if the player shakes the Wii Remote. The Blimp Fruit appears in the Tall Trunk Galaxy, Starshine Beach Galaxy, Flash Black Galaxy, and Bowser's Galaxy Generator.

Hungry Lumas return from the previous game serving the same function. However, they will only turn into galaxies.

There are also Hungry Lumas that eat coins instead of Star Bits. They only turn into planets.

She also appears inside the Starship Mario, where she may turn into a Chance Cube.

When you drag a Super Mushroom on a Hammer Bro, it transforms into its fatter variant, the Sledge Bro.

Unlike in its original appearance, Mario cannot be Fire Mario, Small Mario, or Cape Mario at the same time as Balloon Mario.