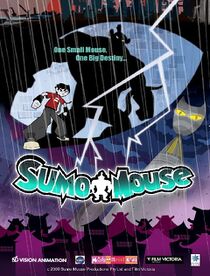 Sumo Mouse is a 2010 Australian cartoon produced by Moody Street Kids. Yama, who lives with his aunt and uncle in a barber shop, finds a magical sumo top knot when his uncle is kidnapped. When he puts it on, he turns in to the great avenger Sumo Mouse. With great powers, he hopes to find his missing uncle while defending the city from the evil Klaw.

Sumo Mouse is revealed to have a weakness to an ancient cheese. When exposed to it the first time, his body starts shifting before turning into a fat shape for a few seconds, then he collapses.