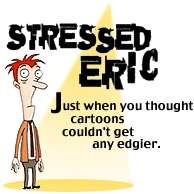 Stressed Eric is a British-American-New Zealand animated black comedy produced for the BBC by Absolutely Productions and animated by Klasky Csupo in the first season with Hibbert Ralph handling animation production in the second season, running from 1998 to 2000 with only 13 episodes produced.

Unlike many animated sitcoms, the father character, Eric Feeble, is divorced. At the age of 40, this continues to stress him along with his family, his co-workers, his work and just about everything else in life, so much so that in the end of most episodes he would be strangled by the vein in his temple.

Brian gives Claire's donkey a dose of liquid from his chemistry set, which made his hamster hyperactive. This energizes the donkey, but unfortunately causes him to explode.

Whenever a character produces an allergic reaction, their body will balloon up and their face will become morbidly grotesque. This happens to Eric's daughter Claire, who is allergic to just about everything.

A friend of Claire's get an allergic reaction when the tent she is sleeping in is let loose. It turns out that this is Eric's nightmare, but the next morning it comes true.