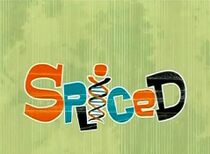 Spliced is a Canadian animated series made by Simon Racioppa and Richard Elliott for Teletoon and Nelvana. A modern spin on The Island of Doctor Moreau, the show takes place on Keep Away Island. A doctor has created numerous mutants through combining DNA, but eventually gets arrested for it. The mutants then make their own society.

Entrée's brother Apéritif, who turns out to be evil, eats him and his friends. Fortunately, they escape by turning Apéritif inside out.

A shrunken Entrée eats some bags of mole-ster nibbles.

In the segment Entrée's Cook Off, Entrée hosts a fake cooking contest to get others to make him food. When the participants realize his hoax, they make him explosive desserts.