Space Quest is a series of adventure games created by Sierra Entertainment. The games follow the various misadventures and exploits of lazy space janitor, Roger Wilco. Like most Sierra adventure games, the Space Quest series is known for the many ways that the player can die. 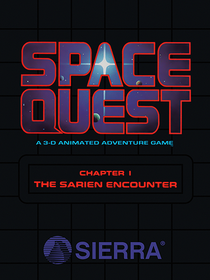 Space Quest: Chapter I – The Sarien Encounter is the first game in the series, released in 1986 for the PC. This games tells the story of Roger Wilco, and his quest to defeat the evil Sarien empire.

After crash-landing on the desert plant of Kerona, Wilco must prove himself to a mysterious alien by killing a giant beast called the Orat, and delivering a part of the Orat as proof of its death. To defeat the Orat, Wilco must feed the beast a canister of dehydrated water. For extra challenge, the player can lure a Sarien Spider Droid into the cave, where it will self-destruct, killing the Orat.