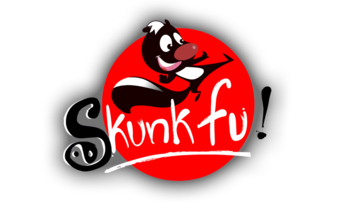 Skunk Fu! is an Irish cartoon created by Aidan Harte that began airing on numerous TV networks in September 2007 and ran until March 2008. The show's protagonist, Skunk, is a young apprentice training to become a Kung Fu master under the strict guidance of his teacher Panda to help his friends defend the valley from Dragon and his army of ninja monkeys.

Panda recalls the days of when he and Dragon would eat the delicious plums from the tree in Moons Deep.

The Art of Hospitality (S1E12b)[edit]

Overstepping his bounds as their guest, Rabbit eats all of Skunk and Panda's dinner.

The ninja monkeys stuff themselves with Duck's cooking and Rabbit takes advantage of this by feeding the whole army until they are too fat to fight any more. Panda also remembers how much he ate when he first tried Duck's cooking.