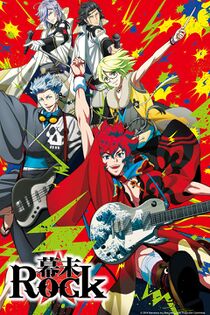 Samurai Jam - Bakumatsu Rock is an anime series based on the PlayStation Portable game Bakumatsu Rock, first aired in July 2014. The story takes place in the Bakumatsu era, when a group of rockers attempt to get freedom against the Tokugawa shogunate's forbidding of any kind of music other than Heaven's Songs.

One of the member of the Dark Cherries, Ouno, participates in an eating contest, and wins it, beating several much bigger men in the process. She did gain a belly just as big as theirs, though.