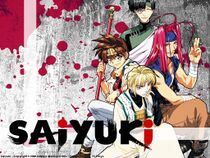 Saiyuki is a manga series by Kazuya Minekura that is loosely based on the Chinese novel "Journey to the West" which was later adapted into various anime television series by Studio Pierrot. The original series, Gensomaden Saiyuki, ran from April 2000 to March 2001, which was then followed by a sequel series known as Saiyuki ReLoad from October 2003 to March 2004, followed by Saiyuki ReLoad GunLock from April 2004 to September of the same year and Saiyuki Reload Blast from July 2017 to the following September.