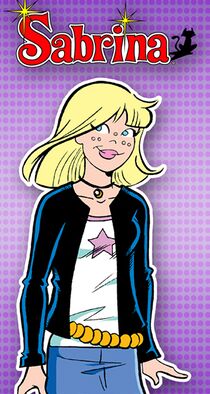 Sabrina the Teenage Witch is an Archie spin-off comic book series published by Archie Comics and created by George Gladir and Dan DeCarlo, about a "half-witch", daughter of a witch and a normal human being, living with her two aunts, Hilda and Zelda Spellman, who are witches themselves. She lives in Greendale, a place close to Riverdale.

The first volume was published from 1971 to 1983, where it went on hiatus until 1997, in which a second volume was released, with a third volume published from 2000 to 2009 and a fourth from 2019 onwards. A television movie and sitcom as well as four animated TV shows have been produced, two of them being DiC's Sabrina: The Animated Series and its spin-off, Sabrina's Secret Life.