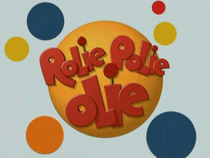 Rolie Polie Olie is a Canadian/French/American animated children's series. It was produced by Nelvana and Sparx* and distributed by Disney. The creators were William Joyce, Maggie Swanson, and Anne Wood. The show revolves around Olie Polie, a young robot who lives on Planet Polie. He learns various lessons while having adventures with his family and friends.

Olie drinks a lot of water in an attempt to get rid of his hiccups.

Billy imagines Olie being allowed to go to the ice cream planet.