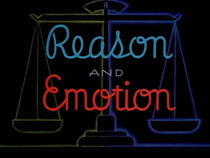 Reason and Emotion is a World War II propaganda short animation film from 1943 produced by Walt Disney. It is a film about why emotions should be controlled for war effort.

In the mind of a woman who slaps Junior, the man who is being controlled by his Reason and Emotion, we see her Reason and Emotion, one simply a female version of Junior's Reason and the other a short, chubby redhead as opposed to Junior's Emotion. Sick of having to sit in the back, she wants to have fun, suggesting eating, despite Reason telling her that they're on a diet. Emotion pushes Reason away and takes control of the wheel, taking the woman to a restaurant where she eats so many things that the chin, profile and figure diagrams show that she has gotten fat, all due to uncontrolled Emotion.