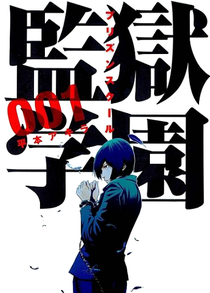 Prison School is an ecchi manga series written and illustrated by Akira Hiramoto that began publishing in Weekly Young Jump in 2011. It has received two adaptations: an anime that premiered in July 2015, and a live action drama that premiered in October 2015.

The series follows the trials about a group of 5 guys (Kiyoshi Fujino, Takehito "Gakuto" Morokuzu, Shingo Wakamoto, Jouji "Joe" Nezu, and Reiji "Andre" Andou) enrolling in a formerly all-girls school and getting sent to a "prison"-like setting for trying to peep on said girls. This prison is lead by 3 sadistic girls, Hana Midorikawa, Mari Kurihara, and Meiko Shiraki. The series follows the boys attempt to escape from the prison by any means necessary.

Meiko is shown to be bloated from drinking too much soda.