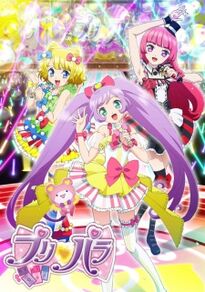 PriPara (プリパラ), short for Prism Paradise, is a Japanese arcade game by Takara Tomy. It is the successor to the Pretty Rhythm arcade games. An anime television series adaptation began airing from July 5, 2014, to March 28, 2017. A second animation adaption, Idol Time PriPara, began on April 4, 2017.

During their trips to different planets, they visit Uranus but it's a food based planet. While there, most of singers get really fat from eating all the food there.