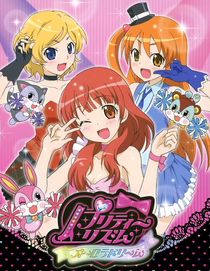 Pretty Rhythm is an ongoing anime series by Tatsunoko, adapted in 2011 from the manga by Mari Asabuki, itself based on the Taito Type X game of the same name from Takara Tomy. The series is about Aira Harune, a girl who is selected to be a performer in Prism Shows, combinations of fashion, singing, dancing and ice skating.

Kanon gets stuffed on autumn food in a fantasy sequence during the manzai routine she performs with Serena in a TV comedy competition.