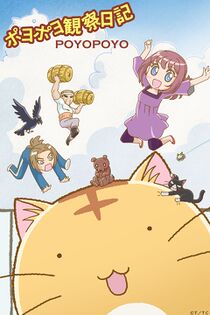 Poyopoyo Kansatsu Nikki (Poyopoyo Observation Diary) is a manga series created by Rū Tatsuki. It is often called Poyopoyo for short. It was made into an anime in January 2012. It focuses on the spherical cat Poyo and his adopters, the Satou family.

Kouta's hamster Daifuku stuffs herself with beans for Setsubun.

Moe recalls her past addiction to red bean doughnuts.

As Autumn Deepens, What Does the Sphere Do? (E40)[edit]

Maki and Kouta become pudgier from studying so much. This extends to their pets.

Poyo becomes even rounder when full.