Pinky and the Brain 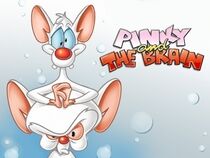 Pinky and the Brain is an American animated series created by Steven Spielberg and Tom Ruegger. The main characters are from a segment in Animaniacs, which was popular enough to be made into its own series. Two genetically altered lab mice, one intelligent and the other stupid, try to take over the world with improbable plans. One way or another, they continually fail. The series was eventually retooled into Pinky, Elmyra & the Brain, which was not received as well.

Pinky and the Brain sport large stuffed guts from overindulging in movie snacks.